The Law Enforcement Torch Run® for Special Olympics is the movement’s largest grass-roots fundraiser and public awareness vehicle, At its most basic level the Torch Run is an actual running event, in which officers and athletes run the Flame of Hope™ to the Opening Ceremonies of local Special Olympics competitions and State and National Games. Annually, more than 85,000 dedicated, compassionate and volunteer law enforcement officers participate in the torch run throughout 35 nations, 12 Canadian provinces and 50 US states, raising over $500 Million since its inception in 1981. 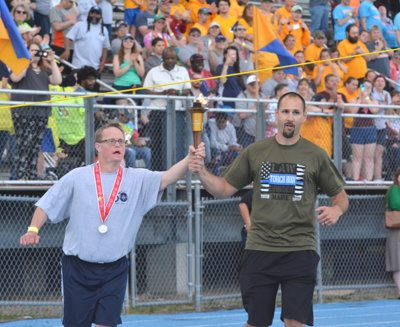 Today, the Torch Run is more than just a run and encompasses a variety of fundraising vehicles such as T-shirt and merchandise sales, special events to include polar bear plunges, tip-a-cop and building sits and a host of other events that have local, state and national appeal. For athletes and officers alike, the Law Enforcement Torch Run® for Special Olympics is a story of success, love, respect and commitment between law enforcement officers and Special Olympics athletes.

In Maine there are over 700 members of Law Enforcement who participate in the Torch Run.

For more information on the Maine LETR please contact:

Any cookies that may not be particularly necessary for the website to function and is used specifically to collect user personal data via analytics, ads, other embedded contents are termed as non-necessary cookies. It is mandatory to procure user consent prior to running these cookies on your website.